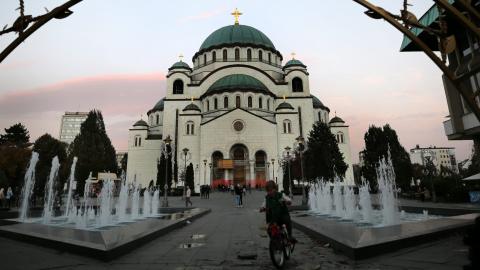 "It was always important for the state to have the support of the Serbian Orthodox Church for its policy, whether domestic or international," he said. "The pressure is not bigger now," Aleksic said, but Vucic's constant presence in the media makes his role appear "most important".

Among bishops, fans and critics of Vucic

Irinej, who was patriarch for 11 years, was widely seen as close to Vucic.

Vucic broke with the ultranationalist Radical Party in 2008 to form the conservative Progressive Party, embracing the cause of European Union accession while also consolidating good relations with fellow Orthodox Russia as well as with China.

Some bishops are effusive in their praise of his leadership, others less so.

In December last year, Bishop Sergije of Bihac-Petrovac and Rmanj in neighbouring Bosnia bordered on blasphemy when, in reference to criticism of the president, he said: "As long as Aleksandar Vucic is being crucified, I know that we are doing well. When they are silent, I know that something is not right and that we will disappear. Vucic's crucifixion is our resurrection!"

Then there's Bishop Grigorije, the 52 year-old head of the Serbian Orthodox diocese of Dusseldorf and all Germany.

Grigorije has emerged as an outspoken critic of the Progressive Party's rule, drawing the ire of pro-government media.

On February 15, he wrote on the diocese's Twitter account that "it is inadmissible for politics and the state to interfere in the election of our new patriarch."