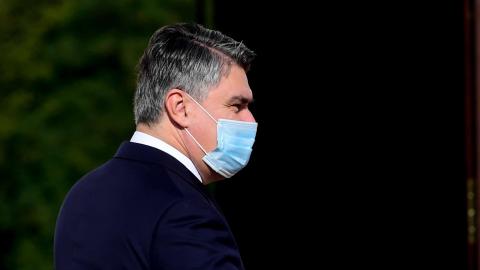 But the Social Democrat leader quickly turned the tide, navigating the campaign waters to emerge as winner of the first round in December 2019.

When she criticised Milanovic's government for its "chaotic" handling of the refugee and migrant crisis that erupted in 2015, the challenger won applause from progressives when he replied, "Only a mind accustomed to repression, which sees human beings in this way, can call the operation of the Croatian state of autumn 2015 'chaos'."

In a second-round head-to-head, when Grabar Kitarovic again accused Milanovic of undermining Croatian sovereignty, Milanovic said it was easy to follow Hungary and Slovenia in throwing up a razor-wire fence in the path of refugees and migrants, but "our children will remember us for our humanity."

As the campaign wore on, Milanovic's nerves began to fray, but he remained the decent, progressive candidate, vowing to bridge the divides in Croatian society. He sounded like a voice of reason.

Taking the fight to nationalists, bigots and Orban

Just days into his term, Milanovic condemned the burning of an effigy of two men and a child at a carnival in the southern town of Imotski, the local community's...

Govt in dilemma about new coronavirus variants and new lockdown