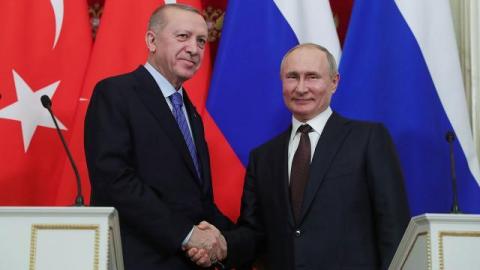 President Recep Tayyip Erdoğan had a phone conversation with Russian leader Vladimir Putin and discussed bilateral relations, and developments in Nagorno Karabakh, a statement from the Communications Directorate of the Turkish Presidency said on Feb. 18.

According to the statement, the two leaders discussed steps to develop ties between Turkey and Russia, along with regional issues.
Erdoğan told Putin that the Turkish and Russian experts could come together with their Azerbaijani counterparts to make the road and railway transportation lines in Nagorno-Karabakh, which are being re-established following the Jan. 11 Agreement, to be more efficient.

Stating that the Turkish-Russian Joint Center in Aghdam has successfully fulfilled the task of monitoring and controlling the ceasefire, Erdoğan added that joint efforts should be made in all matters to protect the ceasefire.

Emphasizing that it is a common interest to resolve the Syrian issue as soon as possible, Erdoğan drew attention to the fact that the opportunity for peace and stability in Libya should not be wasted.

Turkey and Russia started monitoring and inspecting a ceasefire in Nagorno-Karabakh between Armenia and Azerbaijan as the joint center built in Aghdam province began operating on Jan. 30.

Turkey wants Russia-Ukraine tension to end peacefully: Minister
Russia: US warships should stay away from Crimea for “their own good”