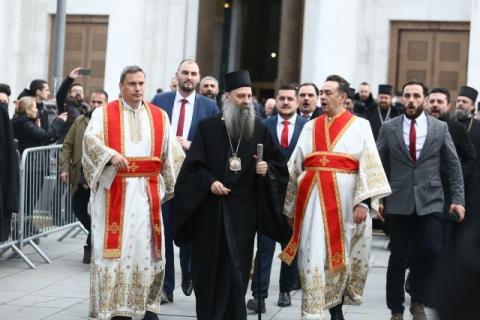 Metropolitan of Zagreb-Ljubljana Porfirije has been elected the new patriarch of the Serbian Orthodox Church.

Who is the new patriarch? Screenshot/ TV B92

His Eminence Metropolitan of Zagreb-Ljubljana Dr Porfirije (Peri) is the fourth Metropolitan of the Diocese of Zagreb and Ljubljana.
He was born on July 22, 1961, in Becej. He is the first from the three children of Radivoje and Radojka Peri, who, after the Second World War, moved to Vojvodina from the village of Osinje near Derventa in Bosnia and Herzegovina. At his baptism, he was named Prvoslav. He received his primary school education in Curug, and finished high school "Jovan Jovanovic Zmaj" in Novi Sad in 1980.
He attended the study of archeology at the Faculty of Philosophy, University of Belgrade. He soon began studying at the Faculty of Theology of the Serbian Orthodox Church, where he graduated in 1987.
He was ordained a monk on St. Thomas Sunday, on April 11, 1986, by his spiritual father, then hieromonk Dr Irinej (Bulovi), the current Bishop of Baka. In the same year, the Bishop of Raska and Prizren, Pavle (Stojevi), the later Serbian patriarch, ordained the monk Porfirije to the rank of hierodeacon in the monastery of the Holy Trinity in Musutite on June 23, 1986.
He attended postgraduate studies at the Faculty of Theology of the NKUA - National and Kapodistrian University in Athens (1987-1990). He obtained the title of Doctor of Science (2004) at the same university. He was ordained a hieromonk on Arandjelovdan, November 21, 1990, in the monastery of the Holy Archangels in Kovilj. He was then appointed abbot of that holy family. He was elected Bishop of Jegar, Vicar of the Diocese of Baka, at the session of the Holy Synod of Bishops on May 14, 1999. He was...