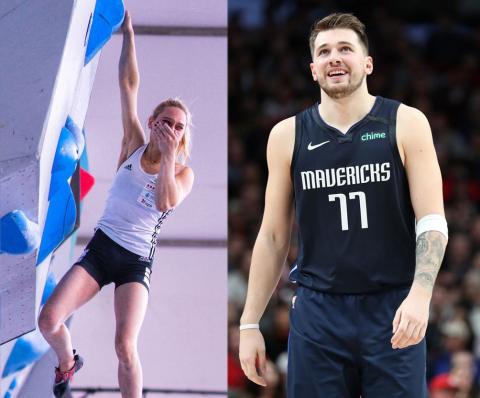 New York – Slovenian NBA basketball player Luka Dončić and sport climber Janja Garnbret have made US magazine TIME’s list of 100 rising stars for 2021, Time 100 Next. The 21-year-olds are featured in the Phenoms category of rising stars in sports.

Dončić, who plays for the NBA’s Dallas Mavericks, was presented to TIME readers by Serbian basketball player Boban Marjanović from the same club.

“You can’t relax on the court with Luka Dončić. Even if you’re not open, he can make Luka magic at any moment – throwing a perfect pass that somehow lands in your hands. Every game, he debuts a new move. It’s crazy,” said Marjanović.

“He’s just 21, but he has already made an all-NBA First Team and is set to earn many more honours,” he added.

Sport climber Janja Garnbret was meanwhile labelled a favourite for gold at the Tokyo Olympics, where competitive climbing will make its debut.

Garnbret hopes this will take the sport to new heights at a time when climbing gyms around the world were forced to close because of the Covid-19 pandemic.

“I have a responsibility to show the sport to the world, and to set a good example,” she told TIME.

She however hopes not only to win gold but to also have fun: “I’m the kind of person who, if I’m not having fun, then I definitely won’t get a good result.”

Dončić will turn 22 on 28 February and Garnbret on 12 March.