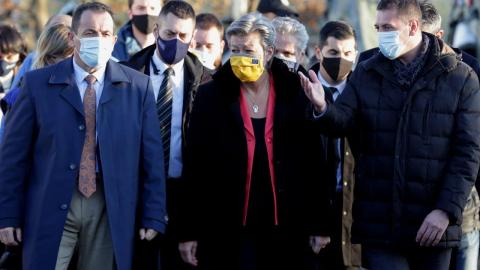 A European Commissioner on a visit to Bosnia on Friday called for all parts of the country to share the burden of migration equally - in an implicit dig at Bosnia's Serb-led entity, which has refused to host migrant camps.

"Everyone in this country must bear their share of the burden of responsibility when it comes to migration," Ylva Johansson, Commissioner for Home Affairs, said in Sarajevo after meeting Zoran Tegeltija, chair of Bosnia's state government, the Council of Ministers, Finance Minister Vjekoslav Bevanda and Foreign Minister Bisera Turkovic. Johansson, who is on a visit to the Balkans, spent two days in Bosnia discussing the migrant crisis.

Of six reception centres for migrants in Bosnia, all are located in the mainly Bosniak and Croat entity, the Federation of Bosnia and Herzegovina - and none in the mainly Serbian entity, Republika Srpska, RS.

After the meeting, Tegeltija said Bosnia and Herzegovina was carrying too much of the burden of the European migrant crisis, and there were more migrants on its territory than the country could accept.

According to Tegeltija, border control and readmission are key to solving the problem. "The readmission process needs to be speeded up and simplified … Bosnia is ready to be a partner in the control of migration but it cannot be a hostage of the migrant crisis and a dormitory for migrants," Tegeltija said.

Johansson called the new program for migration and asylum at the level of the European Union a "new beginning" in solving the problem, for which it is first necessary to obtain the consent of all EU members.