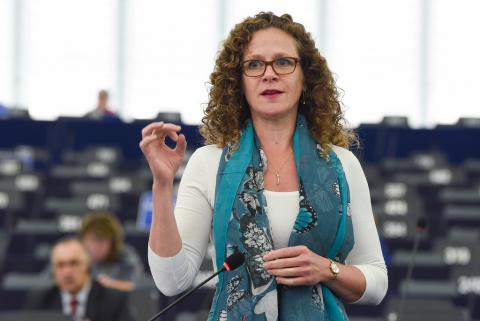 Ljubljana – Dutch MEP Sophie in ‘t Veld (D66/Renew) believes there is sufficient ground for the European Parliament’s Democracy, Rule of Law and Fundamental Rights Monitoring Group, which she heads, to start monitoring the situation in Slovenia.

Speaking in an online debate on media freedom hosted by her party D66, the MEP said the decision on such fact finding would have to be taken in the European Parliament. The monitoring group is part of the Committee on Civil Liberties, Justice and Home Affairs.

With the theme of the debate questioning whether Slovenia is the EU’s next autocratic country, ‘t Veld said that it would be problematic if the Slovenian government followed the views of Hungarian Prime Minister Viktor Orban and Poland.

As an example she noted that Prime Minister Janez Janša would initially not acknowledge Joe Biden’s victory in the US presidential election. She also suggested potential difficulties as Slovenia presides the Council of the EU this year.

The MEP noted that the group she heads monitored the situation in Slovakia and Malta after the murders of investigative reporters Jan Kuciak and Daphne Caruana Galizia three years ago, and the “poisonous atmosphere” towards journalists in the two countries prior to the murders.

She described as unusual Janša’s response to Tuesday’s Politico article on the media situation in Slovenia as he attacked the author Lili Bayer, a well respected journalist, accusing her of being “instructed not to tell the truth”.

“It is unusual for a senior politician in his position to use such language against a journalist,” Sophie in ‘t Veld said. She expressed concern about the Politico article writing that Slovenian reporters are responding to pressure and hate speech with censorship.

In response to the Politico article Inside Slovenia’s War on the Media, Janša tweeted “Well, @liliebayer was instructed not to tell the truth, so she quoted mainly ‘unknown’ sources from the extreme left and purposely neglected sources with names and integrity.” He also accused her of lying.

Janša’s tweet invited widespread condemnation with many foreign correspondents in Brussels, media and organisations defending Bayer against what the International Press Association condemned in a tweet as a “baseless and rude attack against our colleague” and Politico.

The European Commission condemned the accusations made by Janša, stressing that hatred, threats and personal attacks on journalists were unacceptable.

Commission spokesperson Christian Wigand pointed to the statement made by European Commission Vice-President and Commissioner for Values and Transparency Vera Jourova about a year ago in the face of attacks on journalists in Slovenia.

Jourova tweeted back then that “free and independent media are key for democracies, EU values: their job is to hold us, politicians, to account. Protection and safety of journalists should be a priority for every country”. Wigand said this still held true today.

Asked by reporters in Brussels whether the Commission condemned Janša’s conduct, he said in French: “Yes, of course. We don’t accept offensive words in relation to journalists, including in this concrete case, and we condemn them. This should be absolutely clear.”

Wigand meanwhile said that in its report on the rule of law last September, the Commission expressed concern about online attacks on journalists in Slovenia.

Asked whether it would launch legal proceedings against Slovenia, Wigand said the Commission could not always act in the field of judiciary given that criminal law was largely in the domain of member states. Mamer added that the Commission would not launch a legal procedure on the basis of a tweet.

Defence Minister Matej Tonin, the head of the coalition New Slovenia (NSi), meanwhile commented on Janša’s tweets by saying that both politicians and journalists, as public figures of sorts, should not be surprised about criticism.

“Assessments of our and your work may be different,” he said, while noting that if Janša wrote a tweet or two fewer, he would probably had a few fronts fewer to deal with.

Commission Vice-President Frans Timmermans also joined the debate, saying on Twitter: “There’s no obligation to like what is written in the media. There is however the obligation to respect media freedom. Vilifying, threatening or attacking journalists is a direct attack on free media. That is why journalists like @liliebayer deserve our support.”

The Party of European Socialists (PES) and the political group of Socialists and Democrats (S&D) in the European Parliament also condemned Janša’s attitude towards journalists.

Earlier, Lucas Guttenberg of the Jacques Delors Institut in Berlin called on the president of the European Council and EU leaders to speak up when their peer “bluntly smears a journalist” for critical reporting.

Among the many who supported Bayer and denounced Janša’s tweet was also the Association of Slovenian Journalists (DNS), while Jože Biščak, the editor-in-chief of the right-wing weekly Demokracija and journalist Vinko Vasle accused Politico and Bayer in an open letter of propagating the far-left and of exporting fake news.

Safilo workers to get higher severance, bonuses as plant shuts down