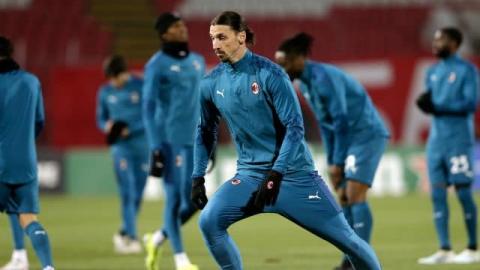 Red Star Belgrade said on Friday that it "strongly condemns the insults" directed at AC Milan striker Zlatan Ibrahimovic by an as-yet-unidentified supporter at a Europa League match in the Serbian capital.

In footage shot at the match on Thursday evening that was circulated on social media, a man can be heard shouting rudely at Ibrahimovic and calling him 'balija', a derogatory word used in Serbia for Muslims, mostly those in neighbouring Bosnia and Herzegovina.

Ibrahimovic is a Swedish citizen but his father is a Muslim from Bosnia. His parents emigrated to Sweden in the 1970s before war broke out in the former Yugoslavia.

Red Star Belgrade said in a statement that the club "sincerely apologises to Zlatan Ibrahimovic for the inconvenience he experienced".

"As a club, we have done everything to ensure that the organisation of the match was up to the level of the two big clubs, and we will not allow one primitive individual to cast a stain on the traditionally well-known hospitality of our country and our people," the statement said.

"Red Star, in cooperation with the relevant authorities, will find the aforementioned individual and insist on him bearing all the consequences of such behavior," it added.

The match was played without fans in the stadium's stands due to restrictions imposed to curb the coronavirus pandemic, but a few supporters were allowed to watch from a VIP box.

Hate speech on the football terraces has deep political roots in the Balkans.

Hardcore Serbian football fan groups have often been used to promote nationalism and spread political propaganda in recent decades, and hate-filled chants have often been directed at Albanians, Croats and Muslims.

Red Star Belgrade and Serbia's other...