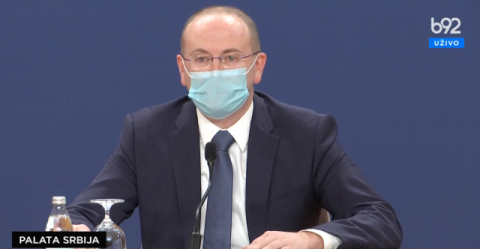 "A lot of unpleasant images during the holidays. I can tell you that 1.581 surveillance was carried out in central Serbia during the holidays. What is worrying is that most of the measures were violated in big cities and winter ski centers. A large number of mandatory sentences have been delivered", Gojkovic said.
"You can punish someone a thousand times. We will again find ourselves in a situation where we will have to take more drastic measures. If we respect epidemiological measures, it will be easier to get out of this," he stated, adding that we will cause spreading of infection if we continue to behave like this.
He pointed out that a decision was made to allow the vaccinated residents of old people's homes to have visits, as well as to leave their homes.
"A big problem after all this, not only for the elderly, is the problem of mental health. We all want to return to normal as soon as possible. The Crisis Staff has decided that, in institutions where possible, patients who have been vaccinated will be allowed visits of their relatives. But, it is very difficult. We are trying as much as possible. The epidemic inside the home brings a huge risk," Gojkovic said.
He also referred to the recent cases of violations of epidemiological measures and the role of the Crisis Staff on that issue.
"We had the prescribed measures that we forwarded to the government. The government adopted them and everyone is obliged to respect them. There are inspections that punish those who do not adhere to them. The Crisis Staff cannot go and condemn what is outside epidemiological measures. Once again I appeal to everyone to respect the measures and to be aware of them at all times", he says.
Dr Radmilo Jankovi from the Clinical Center in Ni said...