He has no equal - Djokovic sovereignly rules Australia! 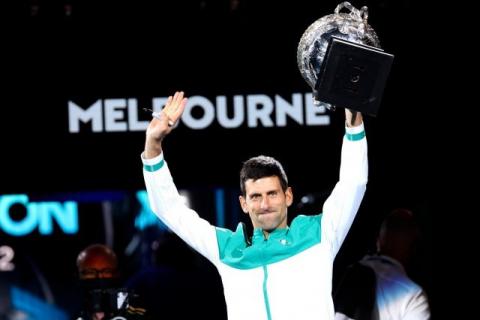 For the ninth time in his career and the third time in a row, in the grand final, the Serb defeated the fourth seed, the Russian Danilo Medvedev, with 114: 5, 6: 2, 6: 2, after 114 minutes of the game.
It was the 18th Grand Slam trophy for the first player in the world who is expected to break Roger Federer's record for the number of weeks at the top of the ATP list on March 8.
It was expected to be difficult, and it turned out that this was another, it would be said, routine victory of the incredible Novak on the fields in Melbourne Park.
A big lesson for Medvedev on how to play the finals, the Russian will have to wait for the first one, although this was his second chance to reach a cup from the biggest tournaments.

The Djokovic Dynasty continues 👑@DjokerNole extends his record for most men's singles titles at the #AusOpen, claiming his ninth crown. #AO2021 pic.twitter.com/VdjCS5OhVG

World No. 1 defeated Daniil Medvedev from Russia in the grand final with 7: 5, 6: 2, 6: 2 and celebrated in Melbourne Park for the third time in a row.
Djokovic is now only two Grand Slam titles away from Roger Federer and Rafael Nadal who hold the record with 20 victories in Grand Slam singles finals.
"Good evening everyone. Thank you very much, just a moment, to say a few words...", Novak began in Serbian, interrupted by the calls of our fans in Rod Laver Arena.
He then continued:
"I would like to return kind words to Daniil. First of all, Daniil, you are a great guy, a wonderful person, you showed it to everyone. We used to spend a lot of time in Monaco in training, although you...