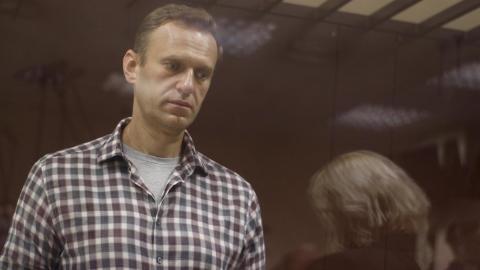 A Moscow judge on Feb. 20 upheld a ruling to jail top Kremlin critic Alexei Navalny, as he lost two court cases in one day and was headed for more than two years in a penal colony.

Another court later Saturday convicted President Vladimir Putin's most prominent opponent on defamation charges -- part of a slew of cases he has faced since returning from Germany last month after a poison attack he blames on the Kremlin.

In the first hearing on Saturday, Judge Dmitry Balashov dismissed Navalny's appeal of a decision to imprison him for violating the terms of a suspended sentence on embezzlement charges he says were politically motivated.

Navalny, 44, was ordered on February 2 to serve two years and eight months in a penal colony for breaching his parole terms while he was recovering in Germany.

The anti-corruption campaigner appeared in court inside a glass cage for defendants, wearing a plaid shirt, smiling and flashing the V for victory symbol.

In a closing address that often broke from his usual sarcastic tone, Navalny referenced the Bible and said he had no doubts about his decision to return to Russia.

"The Bible says: 'Blessed are those who hunger for righteousness, for they will be satisfied,'" he told the court.
"I have no regrets that I am back."

He also quoted from a character in the Harry Potter books, saying it was "important not to feel alone" because that was what the series' villain Voldemort wanted.

He described the legal process to jail him "absurd" and called on Russians to take action to make the country a better place.

"Russia should be not only free, but also happy," Navalny said.

Prosecutors said Navalny had acted as if he was above the law and had "an exclusive right...