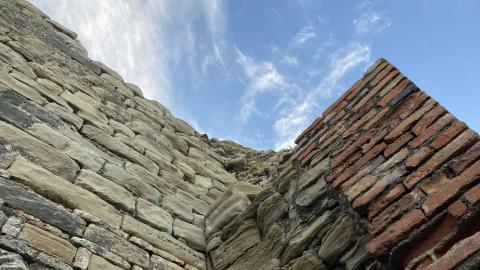 With its natural beauty and historic sites, the Albanian Adriatic seaside landmark, the Cape of Rodon (Kepi i Rodonit), draws the attention of locals and tourists alike.

Located some 60 kilometres northeast of the capital, Tirana, the peninsula-shaped strip of land provides visitors with abundant attractions.

However, the poor quality of the road for most of the 14km drive from the coastal village of Gjiri i Lalezit to the cape makes it difficult for visitors to get there. There is also a lack of road signs.

A narrow and muddy 2km-long lane leads visitors to the medieval castle of Albania's famed national hero, Skanderbeg. Situated on the cape between northern town of Lezha and the central town of Durres, his Rodoni Castle is one of the most important medieval fortifications in Albania.

Another historic site, St. Anthony's Church, lies in a valley by the seaside. According to the description near the church, it dates from the end of the 16th century.

In addition to the castle and church, local artists have painted Albanian flags on the walls of other, odder attractions - the defensive bunkers built by Albania's dictator, Enver Hoxha, during the 1960s, 1970s and 1980s - designed to stop an invasion that never came.