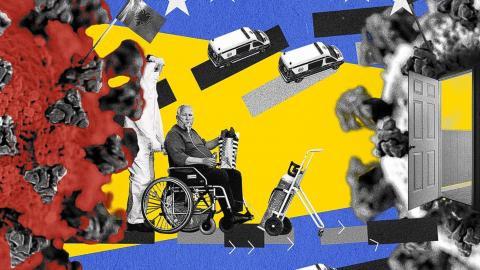 "I think they [the Kosovars] have more than compensated for the debt of 1999," he added, referencing Kosovo's independence war with Serbia of spring 1999 when Albanians- especially those who live in the cities and villages near the border with Kosovo- sheltered hundreds thousands Kosovo Albanians who flew their homes.

Data BIRN obtained from the Ministry of Health in Kosovo and from the hospitals in Gjakovë/Djakovica and Prizren shows that several dozen COVID-19 patients from Albania have been treated there.

Moreover, they have all returned home alive and full of praise for the service and care they received from the hospitals in Kosovo.

"I didn't think of going to Tirana for a second," Emerli Caushi, from the village of Zaharisht, in Albania's Has municipality, told BIRN after recovering from COVID-19 at the "Isa Grezda" Hospital in Gjakovë.

While healthcare in Kosovo is far from state-of-the-art because of lack of investment, hospitals in Albania are widely perceived as corrupt, and the population from remote areas often lacks confidence in them.

"I'd preferred dying instead of going there," Caushi added, melodramatically.

In Albania, there is a general expectation that patients should "reward" hospital staff with off-the-record, out-of-pocket payments.

Some Albanian patients apparently assumed they should so the same with the medical staff in Kosovo.

"I tried once to offer them some money but they refused it," Caushi told BIRN, evidently puzzled. "The doctor there didn't even think about accepting money," he added.