Kon: Two topics for the Crisis Staff, we have to consider schools as well 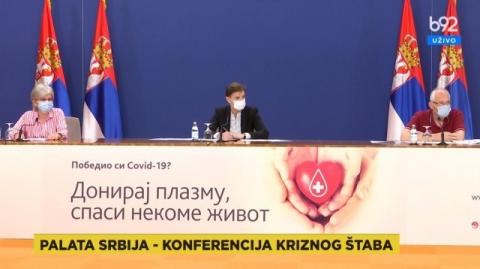 Epidemiologists warned about such consequences even before the extended weekend due to the national holiday of Sretenje.
Epidemiologist Predrag Kon said tonight that the Crisis Staff will discuss working hours and gatherings.
Kon added that the medical part of the Crisis Staff is clear and that we cannot afford no new sudden increase in numbers.
The medical part of the Crisis Staff was quite clear when it came to the new measures. "One is related to working hours, and the other is ban on gatherings. When we talk about additional gatherings, we have to think about schools," Kon said explicitly.
"Certainly we have to consider schools because that was a problem in other countries," he said. Kon emphasized that "the curfew is over", and that this measure requires a lot of time and effort. "The curfew itself is not a topic, but working hours certainly are," Kon stated for RTS.
He added that the most favorable solution for Belgrade, but also for Serbia, will be sought in terms of working hours.

Kon says that the worsening of the epidemiological situation started at the end of January, but that it is now even more visible.
"We warned everyone, we said that an extended weekend presents a risk, staying in various winter ski centers, that one should keep one's distance and that everyone who goes is at increased risk. Even after the holidays, it was noticed that the children who were in the winter centers brought the virus", Dr Kon stated.
According to him, the leap in the number of patients among high school students is noticeable, so there are grounds for tightening the measures, which will be decided at the session of the Crisis Staff on Wednesday.
...