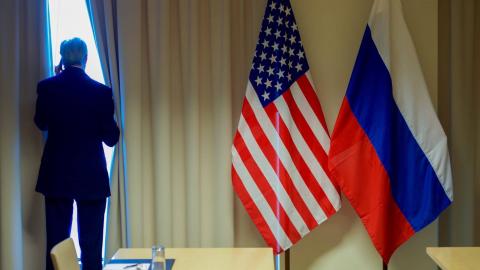 Biden and his foreign policy team are known quantities in Moscow, and their calls to be tougher on Russia are taken seriously there. In any case, the Kremlin sees an anti-Russian tinge to almost all the key points of the new US administration's agenda.

When Biden pledges to restore ties with Europe, the Kremlin assumes this will be done by othering Russia.

Washington's readiness to show greater flexibility in its dealings with China is viewed in Moscow as a desire to concentrate more resources on pressuring Russia.

Biden's promise to restate America's support for democracy sounds to the Kremlin like an intention to promote regime change in Russia's neighborhood and in Russia itself.

Recent developments in the latter have already pushed tensions in Moscow's relations with the West to new heights.

For the Kremlin, it is no coincidence that its veteran critic, Alexei Navalny, returned to Russia just two days ahead of the US presidential inauguration, after spending months in Germany, where he was undergoing treatment following his poisoning with a deadly nerve agent in August 2020.

West's support for protests seen as 'declaration of war'

The Spasskaya Tower of Moscow's Kremlin on the Red Square in Moscow, Russia, 2021.Photo: EPA-EFE/SERGEI ILNITSKY

In the Kremlin's eyes, recent protests across Russia, and the West's harsh condemnation of Navalny's imprisonment, and its pledges to support Russian civil society in its standoff with the authorities, amount to a declaration of war.

The perception is that the West launched a coordinated offensive against the Kremlin as soon as the new president moved into the White House.

Hence the reaction of Russian officials to Western...