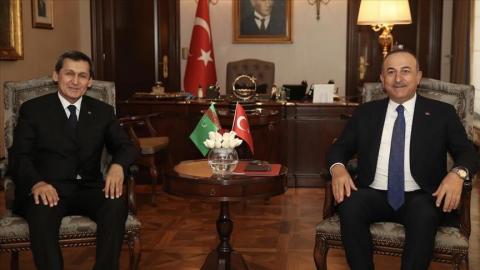 Ankara is ready to contribute to carrying Turkmenistan's gas via Turkey to Europe, Foreign Minister Mevlüt Çavuşoğlu said on Feb. 23.

"We are ready to do our part for the arrival of Turkmen gas in Turkey and through Turkey to reach Europe," Çavuşoğlu said at a joint press conference with his Turkmen counterpart, Rasit Meredov.

He celebrated the 30th anniversary of Turkmenistan's independence and stated that the two countries made efforts to improve their relations on the law of brotherhood.

Çavuşoğlu stated that the two ministers discussed which steps would be taken in relations and emphasized that the road map within this framework is being reviewed.

President Recep Tayyip Erdoğan also wants to pay a visit to Turkmenistan, the minister said, adding that they want to hold the Turkey-Azerbaijan-Turkmenistan summit in Turkmenistan.

Çavuşoğlu stated that bilateral economic relations have gradually increased despite the pandemic and that they agreed to revive the mechanisms to reach the 2014 trade level again.

Thanking for the support given to Turkish companies both in Turkmenistan and in regional projects, Çavuşoğlu said, "We want to start negotiations on preferential trade agreements as soon as possible within the agreements we will sign in the coming period."

Reminding that Turkish Airlines could not fly to Turkmenistan due to the pandemic, Çavuşoğlu stated that they recently requested the support of this country to start flights in accordance with the pandemic conditions.

Çavuşoğlu expressed Turkey's will to develop relations with the entire region and noted that Ankara welcomed the...

UNESCO: Pandemic Has Worsened Minorities’ Schooling in Balkans, Central Europe
The only Covid-19 free country in the world is...(infographic)
INACO: Romania, last place in EU for women representation in Government, similar percentage with Iraq, Bahrain
The Last Coronavirus-Free Countries On Earth (infographic)
ParliamentaryElection2020/ Until 7:00 Romanian time, over 21,500 Romanians abroad cast their vote
ParliamentaryElections2020/ForMin Aurescu: It's important Romanians in the diaspora vote in both days