Bulgaria’s President: Discrimination against Ethnic Bulgarians in North Macedonia Must Be Done with 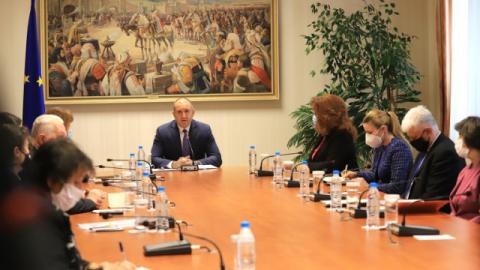 Bulgarian President Rumen Radev has called on the responsible institutions in Bulgaria and the Republic of North Macedonia to respond promptly to alerts about significant issues confronting Bulgarians in North Macedonia, the Head of State's Press Secretariat said on Monday.

Radev's position is prompted by a letter from ethnic Bulgarians in the Republic of North Macedonia, received at the
Administration of the President, in which they voice concern over their ongoing discrimination in that country, the press
release says.

The Head of State argues that respect for the free right to self-determination of Bulgarians in the Republic of North
Macedonia who, despite all repressions during the totalitarian past, have preserved and continue to openly express their
Bulgarian national identity, is a key step in the promotion of good-neighbourly relations between the two countries.

The President expects the official authorities in North Macedonia to counter the alarming proportions that hate speech against Bulgaria and Bulgarians in that country are assuming, given that over 100,000 people in the Republic of North Macedonia hold Bulgarian citizenship acquired on the basis of their freely expressed will and documented Bulgarian ethnic origin, and that Bulgarian citizenship applications of thousands of others are being processed. "Bulgarians in the Republic of North Macedonia must enjoy equal rights with the rest of the citizens in that country, in line with the most rigorous world and European standards. This basic principle of democracy is also enshrined in the 2017 Treaty of Friendship, Good-neighbourliness and Cooperation between the two countries," Radev's position reads.

The Bulgarian President backs appeals by...