MHP leader warns youngsters to stay away from violence 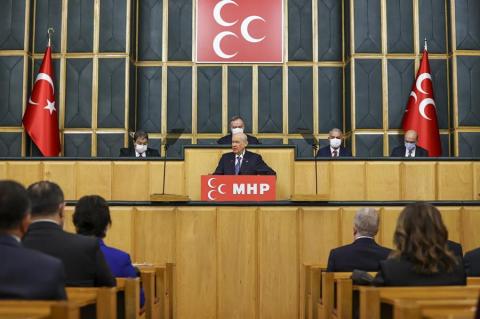 Nationalist Movement Party's (MHP) leader Devlet Bahçeli on Feb. 23 called on youngsters of Turkey to be careful in expressing their objections and avoid "making wrong choices," while warning them to stay away from the "terror groups in front of university doors," referring to Boğaziçi University protests.

"We cannot tolerate our youths being an apparatus of violence. The criminal networks that haunt our youth should know well that we do not have a single young man to send them to the mountains, to lose at the protests at the university gates, or to throw Molotov cocktails on the streets. Those who set up a bench in universities should pay a heavy price for this," the MHP leader said, speaking at his party's parliamentary group meeting.

Every development at Boğaziçi University has been "clearly distorted," he said while claiming that some political parties were also involved in this business.

"I extend my hand to each younger brother and embrace them indiscriminately. They are our everything, they are our distinguished values that cannot be confined to voting anxiety, to political debates, or simple calculations of interest," Bahçeli stated.

The healthy share of young people in Turkey's population shows the country's strength and potential in the decades to come, he said.

"About 15.6 percent of our population consists of young people. Turkey's young population rate is much higher than the young population in European countries. This picture is clear evidence of our potential and our comparative and strategic strength," the politician said.

Dismissing the demographic categories of generations X, Y and Z, Bahçeli said, "We do not analyze them in this way," adding that soon other letters of the alphabet would be needed, and...