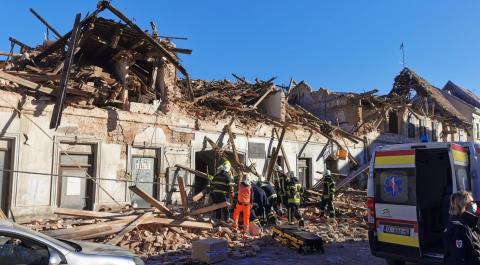 Ljubljana – A humanitarian football match between Slovenian and Croatian legends will be played in the Croatian town of Petrinja on 13 March to raise funds for the area that was hit by a devastating earthquake at the end of last year.

The charity game comes upon an initiative of Slovenia’s Aleksander Čeferin, the president of the Union of European Football Associations (UEFA), and the head of the Croatian Football Federation (HNS) Davor Šuker.

Announcing the event on Monday, the Slovenian Football Association (NZS) said that the UEFA would hand out on the occasion a donation to the Croatian Red Cross as aid for the areas that had been hit the hardest by the earthquake.

It was on 29 December 2020 that the quake of magnitude 6.4 hit Petrinja, south-east of the capital of Zagreb, killing seven people and causing substantial material damage. It was followed by several powerful aftershocks.

“I am deeply compassionate with the residents of Croatia in these difficult times. We hope that the support from the football world will help ease the problems that this horrific earthquake has left behind,” Čeferin said.

The HNS will make a donation for reconstruction of football facilities that have been damaged by the earthquake. The NZS, as the co-host of the charity match, will provide a donation of its own for people affected by the disaster.

Šuker commented on the effort by saying that “we are again witnessing a great deal of solidarity within the European football family.”

“I’m convinced that football is one of the best ways to bring back smiles to people’s faces. So let this match be a sign of return to normal life,” added the Croatian football legend and member of the UEFA Executive Committee.