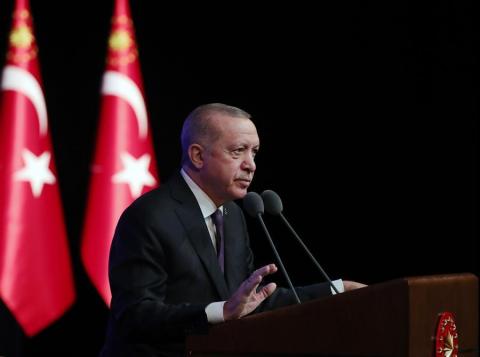 Turkey is the most successful nation in effectively carrying out its vaccination program, President Recep Tayyip Erdoğan has said, informing that more than 7.5 million doses of the vaccine developed by China's Sinovac Biotech have been given to the Turkish citizens since the start of the campaign in January.

"Currently, Turkey is the most successful country in the world in efficiently carrying out its vaccination program. Around 7.5 million [doses] have been shot. And we are conducting this process in a serious and determined way," Erdoğan said at a meeting in the Turkish capital Ankara on Feb. 23

Turkey has had no luxury in relaxing amid the ongoing COVID-19 pandemic, Erdoğan said, reiterating that the Turkish health care system has been successfully handling the pandemic thanks to the investments his government has been making since it came to power in the early 2000s.

"No relaxation. We are taking additional steps. We cannot afford to relax," he said.

Mass vaccinations began in Turkey on Jan. 14 with the vaccine developed by China's Sinovac Biotech. Apart from the Chinese vaccine, Turkey is also planning to receive the MRNA vaccine from Pfizer-BioNTech.

"Despite problems, Turkey is among few countries that have been carrying out education uninterruptedly. We have delivered around 2 million tablet computers to our students with 675,000 of them during the pandemic," he informed.

The online education portal has become the most visited educational website in the world in the year 2020, Erdoğan stated.

"Digitalization of education has come to the...