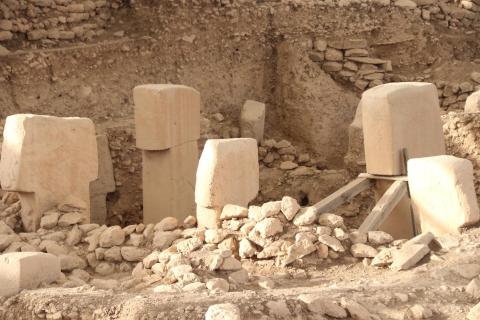 Home to 12,000-year-old Göbeklitepe and Balıklıgöl, two of the recognized centers of faith tourism, Turkey's southeastern province of Şanlıurfa is waiting to welcome tourist once again in the coming spring season with steps for the gradual normalization to begin soon.

Known for its natural richness, long history, and potential in the field of faith tourism, Şanlıurfa hosts thousands of local and foreign tourists every year, fascinating them with its rich cultural heritage.

People visit places such as Balıklıgöl, which is narrated as the place where Prophet Abraham was born and was thrown into the fire, Göbeklitepe, which is described as the "zero point of history," the historical Harran district, known for its conical domed houses, and Halfeti, which stands out with its natural beauty.

The city's tourism diversity increased with the hot air balloon tours that started this year in the skies of Göbeklitepe and continued with new finds in Karahantepe.

Due to the COVID-19 pandemic, the city was not active in tourism in 2020. However, with the normalization steps expected to be taken soon, Şanlıurfa aims to become a favorite spot of tourists this season.

Speaking to the state-run Anadolu Agency, Şanlıurfa Metropolitan Mayor Zeynel Abidin Beyazgül said that with the declaration of 2019 as the "Year of Göbeklitepe," the number of visitors in the city reached its peak, and it became the favorite destination for both local and foreign tourists.

Stating that they are working to attract tourists to the region and that balloon tours started in Göbeklitepe, Beyazgül said that people who would visit the city would have the opportunity to get a bigger view of historical places with hot air balloons rides.