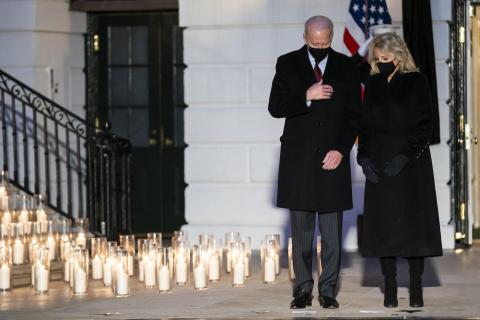 President Joe Biden ordered flags lowered to half mast on Feb. 23 after the United States crossed the "heartbreaking" milestone of 500,000 COVID-19 deaths, while Britain eyed lifting lockdowns in the latest sign of global gains against the pandemic.

"I know what it's like," an emotional Biden said in a national television address, referring to his own long history of family tragedies.

"I ask all Americans to remember, remember those we lost and those they left behind," Biden said. "I also ask us to act, to remain vigilant, to say socially distant, to mask up, to get vaccinated."

Biden, accompanied by his wife Jill and Vice President Kamala Harris and her husband Doug Emhoff, then stood outside the White House to mark a moment's silence in front of 500 candles representing the toll - the highest reported of any country.

Earlier, flags were lowered over the White House and at federal buildings nationwide as well as at embassies around the world.

"As a nation we cannot and must not let this go on," Biden said, urging unity. "We have to fight this together as one people, as the United States of America.

Unlike his predecessor Donald Trump, who often sought to minimize the disease, Biden has made the pandemic his top priority, simultaneously pushing an aggressive vaccine rollout and making frequent, public shows of empathy.

It is a strategy that could make or break the Biden presidency, already juggling high-stakes economic challenges and the tense political aftermath of the Trump era.

But signs are also emerging that progress is being made both in the United States and around the world, with infections dropping sharply and vaccine...