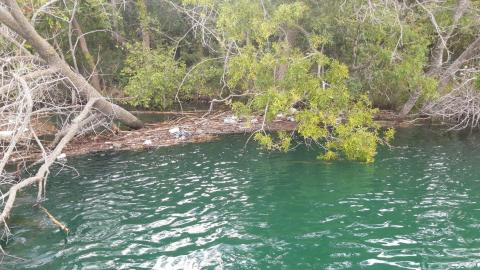 "I don't think there is a single organism in the sea any more that has not been in contact with plastic," the 44-year-old told the Centre for Investigative Journalism of Montenegro, CIN-CG, the Balkan Investigative Reporting Network, BIRN, and the weekly Monitor.

It is precisely because of the quantity of plastic in it that the Adriatic Sea was declared one of the most polluted seas in Europe after the northeastern part of the Mediterraneanand the Celtic Sea in a study by an international team of experts published in the journal Marine Pollution Bulletin.

The waste is generated by the some four million people who live along the Adriatic coast, and by tourists who increase that number six-fold every summer.

Of the waste that ends up in the Mediterranean, the highest amount per capita - eight kilograms per year - is generated from Montenegro, according to the International Union for Conservation of Nature, IUCN - to devastating effect for the environment, fish stocks, local communities and Montenegro's long-term appeal to the tourists on whom the country's economy depends.

Environmental activist Azra Vukovicsaid plastic accounts for 80-90 per cent of waste in the Adriatic, including carrier bags, cups, bottles and plastic cutlery, "creating a major problem for the organisms that live in the sea, but also for those on the land."

Much of the waste reaches the Montenegrin coast via the River Bojana that flows from Lake Skadar on the border between Albania and Montenegro.

The problem is at its worst during the first autumn rains, when brooks and streams start flowing again and bring down waste discarded in dried-up...