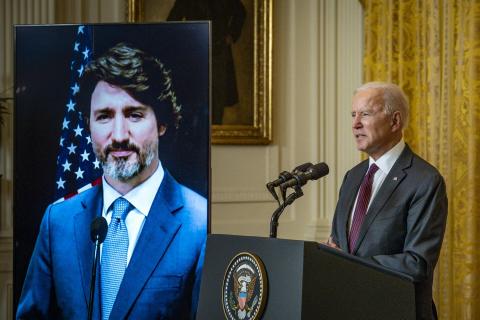 "The United States has no closer friend than Canada," Biden said, setting the tone for the get-together conducted by video link between the White House and Trudeau's office in Ottawa.

Although COVID-19 restrictions kept the two leaders apart physically, they went out of their way to demonstrate that the giant neighboring countries are back to their traditional closeness after the tension of Trump's "America first" policies.

"We have a robust agenda today and we're all best served when the United States and Canada work together and lead together," Biden said in public remarks before heading into closed-door talks.

Repaying the compliment, Trudeau said they would work "together to get through COVID but also to make sure we're pulling our weight around the world and making the world a better and safer place for everyone."

Trudeau thanked Biden - who has put the United States back into the Paris climate accord on reducing global carbon emissions - for his policies on global warming.

"U.S. leadership has been sorely missed over the past, uh, past years," he said in a not so hidden dig at Trump.

The White House is touting that Feb. 23's extensive talks will provide a "roadmap" for better relations.

Trump, who recategorized Canada and other U.S. allies as competitors, had a sometimes tense personal relationship with Trudeau.