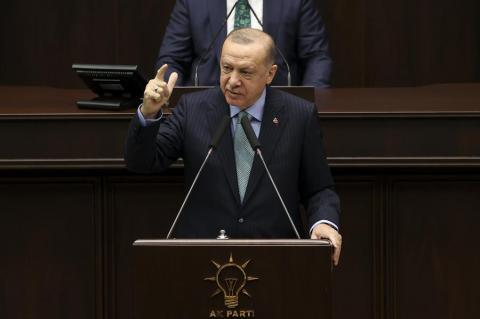 Turkey's counter-terror operations within and across its borders are the country's legitimate right as well as "humanitarian missions," President Recep Tayyip Erdoğan said on Feb. 24, emphasizing that Ankara would continue these military operations.

"Terrorist operations conducted in and outside Turkey's borders is a legitimate right," Erdoğan said while addressing his party members at the parliament.

Ankara will not ask for approval from foreign actors to fulfill the "mission of brotherhood and friendship" imposed on the government by Turkey's "thousand-year existence in its geography," he stressed.

"We will not stop until we secure all our borders deep enough," the president said, referring to Turkey's cross-border military operations.

He also said that all countries should back Turkey's fight against terrorism.

"We call on everyone who has principles and honor to back Turkey's legitimate fight and approach on terrorism," Erdoğan stated.

But countries who qualify this fight with words such as "but" or "however" are making "a critical mistake," he added.

Turkey has long been warning the Western countries for dealing with terrorist organizations, he noted.

"If you don't put out the fire of terror where you see it, one day it will surely spread toward you… Despite this, the same mistakes are still being repeated. Here we are all watching the fate of those who do not listen to us," he said.

"We don't even want to think about the future of these countries, whose streets are covered with fire and blood, whose parliaments are occupied, and who are shaken by racism and Islamophobia," he said.

"Countries which prefer to cooperate with bloody-minded terrorists rather than Turkey, one of the oldest...