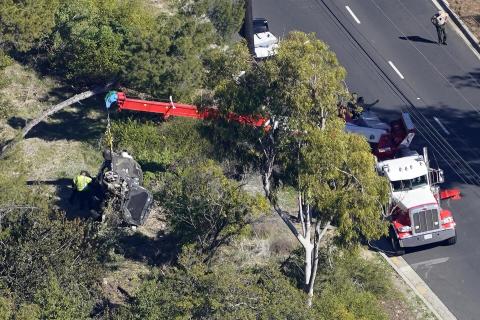 Tiger Woods crashed his SUV on sweeping, downhill road in the Los Angels suburbs on Feb. 23 morning, and doctors tried to stabilize "significant" injuries to his right leg with rods and a combination of screws and pins.

Woods was driving to a television shoot when his SUV crashed into a median, rolled over and ended up on its side near a steep road known for wrecks, authorities said. Golf's biggest star had to be pulled out through the windshield.

Woods' foundation said in a statement he was awake, responsive and recovering in the hospital.

Dr. Anish Mahajan, the chief medical officer at Harbor-UCLA Medical Center, said Woods shattered the tibia and fibula bones of his lower right leg in multiple locations. Those injuries were stabilized with a rod in the tibia.

Additional injuries to the bones in the foot and ankle required screws and pins, Mahajan said in a statement released on Woods' Twitter account late on Feb. 23 night.

A resident near the accident site called 911. A Los Angeles County sheriff's deputy, the first on the scene, poked his head through a hole in the windshield to see Woods, his seatbelt fastened, sitting in the driver's seat.

The single-car crash was another setback for Woods, the preeminent golfer of his generation who has spent the last decade in a cycle of injuries, self-inflicted personal problems and an arrest for DUI. Each time, he returned to the course and won.

Even at 45, Woods is among the more recognizable sports figures in the world and remains golf's biggest draw. His 2019 Masters victory was seen as a transcendent comeback and further cemented his reputation for toughness and clutch performances. Briefly Tuesday, the world paused and...