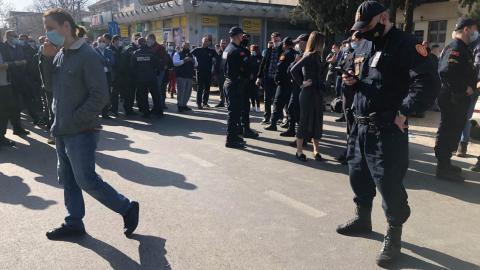 Protests in the town of Tuzi against the government health measures. Photo: BIRN/Samir Kajosevic

Protesters called on the government to withdraw its decision to prohibit the work of cafes and restaurants in the town. Police forces are currently deployed in the town where the cafes are still working, despite the ban.

"The government has made a political decision because Tuzi does not have a high number of infections and owners of restaurants have a right to work," the mayor claimed.

"We have respected all the health measures and we expect the state to negotiate with us. We had to block the road because in this way we are defending the constitution of Montenegro," Gjeloshaj added.

The mainly ethnic Albanian town of some 15,000 residents is the centre of the Malesia area that borders the capital on one side and stretches to the border with Albania on the other.

The municipality is run by an ethnic Albanian coalition and the Bosniak party, which are in opposition at state level. Gjeloshaj accused Prime minister Zdravko Krivokapic and deputy PM Drritan Abazovic of putting political pressure on the ruling coalition in the town.

"This is their revenge for our decision to fly the flags of Kosovo and Albania. Their pressured police and prosecutor to file charges against me," Gjeloshaj added.

On Wednesday, the authorities imposed restrictive measures over a large part of the country, saying that cafes and restaurants would close in all coastal towns and also in Danilovgrad and Tuzi.

After Gjeloshaj's warning he will not respect the new health measures, the State Prosecutor said he risked facing criminal charges.

While civic activists and some parties have called for the easing the tensions in Tuzi, the government has...