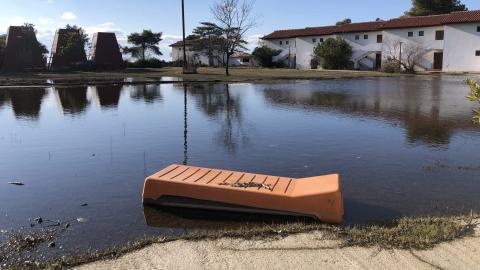 For roughly a decade, authorities in Montenegro have been trying to turn the nudist camp into a residential area, but with little success.

"The nudist camp on Ada was our pride during the golden age of Montenegrin tourism," Karamanaga told BIRN. "In the 80, the nudist camp was full of tourists all through summer. There were guests from all over the world, ready to spend good money and enjoy in nature."

"Ada is almost an abandoned island and the once-famous bungalows are now just old barracks."

Camp being reclaimed by nature

Situated on the border between Montenegro and Albania, Ada Bojana is carved out on two sides by the river Bojana, 2.9 kilometres of sandy beach lapped by the Adriatic.

The naturist resort opened in 1973, when Montenegro was part of socialist Yugoslavia under Josip Broz Tito.

In the 80s, according to Yugoslav media reports at the time, the camp hosted 3,000 guests per day in the summer season.

"Movies were made about this camp and the work of a lot of people from [the town of] Ulcinj was linked to Ada," said Karamanaga. "Now it's just a memory and the camps left to oblivion."

The decline began in the 90s, when federal Yugoslavia collapsed in war and tourists stayed away. The Yugoslav army took over.

Houses and cottages have fallen into disrepair, the roofs of bungalows are falling in and park trails to the beach have become overgrown. In the old part of the camp, the doors and windows of every house are broken.

Guests began returning, from Serbia and Montenegro, in the late 90s, while a trickle of foreign tourists started visiting in 2001.

Today, only a part of the resort has been...