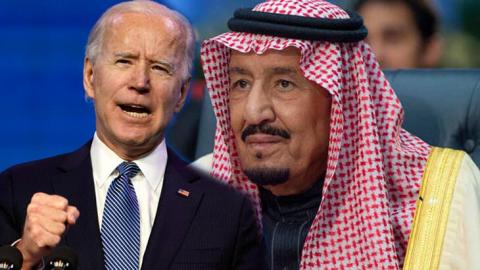 Biden kept the king waiting in his long list of calls to U.S. allies after being sworn in five weeks ago.

And when he did finally reach out to the Saudis, it was pointedly to the king and not the expected successor Crown Prince Mohammed bin Salman, commonly known as MBS.

The telephone diplomacy was all part of what the White House is calling a reset in relations in the wake of Khashoggi's horrific 2018 murder inside the Saudi consulate in Istanbul, Turkey.

A U.S. intelligence report on the incident, in which Khashoggi is believed to have been killed and then chopped into pieces, is being made public "soon," the White House says.

It is expected to state that the crown prince in some capacity was connected to the killing, which involved a whole squad of Saudi agents positioned at the consulate before Khashoggi visited.

Khashoggi, a Saudi national who wrote for The Washington Post and was a U.S. resident, had been an outspoken critic of the young prince.

The White House said that Biden and the 85-year-old king emphasized the countries' security ties and "the US commitment to help Saudi Arabia defend its territory as it faces attacks from Iranian-aligned groups."

However, in a shift from the Donald Trump era, Biden also "affirmed the importance the United States places on universal human rights and the rule of law."

The Saudi state news agency said in its readout that the king and Biden stressed "the depth of the relationship between the two countries" and...