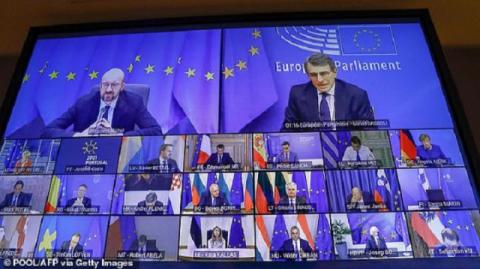 EU leaders have agreed to introduce vaccine passports by the summer in a boost to Britons planning holidays on Europe's beaches.

Having suffered its deepest recession to date and still floundering on the rollout of its vaccination programme, German Chancellor Angela Merkel said that 'everyone agreed that we need a digital vaccination certificate' programme during a virtual summit.

But Merkel admitted technical work on the vaccine 'passports' by the EU Commission would take three months to complete, meaning it would not be ready when Britain could start easing international travel restrictions in May.

It comes following pressure from southern European countries to have schemes in place to help safely kickstart their tourism-dependent economies.

Greece officials plan to have the country open by May, and want a scheme that will allow entry to people who have received both doses of an approved Covid vaccine.

The country's government is reportedly considering plans to open its borders to vaccinated Brits that month, which could put it in conflict with EU plans on foreign travel.

Spain has also been pushing for an EU-wide passport policy as the country is desperate to kickstart tourism. Its foreign secretary proposed that 'vaccine certificate holders could be exempt from taking a test'.

Austria has also called for an EU-wide 'green passport' which would allow people to go on holiday and 'enjoy gastronomy, culture, events and other things again'.

The move has face resistance from

countries - including France and Belgium - who are concerned that easing travel for people who have been inoculated would discriminate against others.

But their claims come as the EU vaccination scheme continues to...