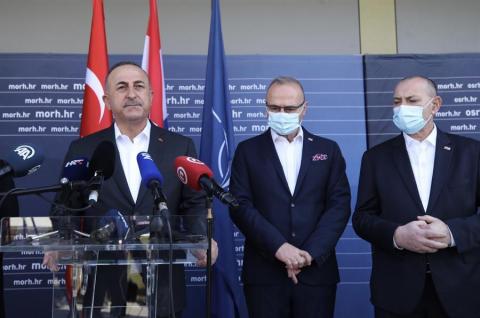 Turkey is ready to support Croatia on the issue of responding to disasters, Foreign Minister Mevlüt Çavuşoğlu said on Feb. 26 and pledged to provide help in the reconstruction of earthquake-affected zones.

"We want to share this experience that we have gained in Turkey for combatting with the friendly Croatia. We would also like to give our best support in the reconstruction of earthquake zones," the minister told reporters.

Çavuşoğlu held a joint press conference with Croatian Deputy Prime Minister Tomo Medved and Croatian Foreign and European Affairs Minister Gordon Grlic Radman in the city of Petrinja, which was damaged by a 6.3-magnitude earthquake in December last year.

Noting that he wanted to start his visit to Croatia from Petrinja, Çavuşoğlu thanked the deputy prime ministers and his counterpart, Radman, who organized the visit.

Recalling the earthquake that occurred with a 4.1 magnitude two days ago, Çavuşoğlu said, "Turkey appreciates the efforts made by Croatian authorities to fix the outcomes of the disaster.

"No matter where the disaster occurs, it is necessary to be in solidarity. The peoples of that country should also be supported. We saw this solidarity from Croatia and the Croatian public after the earthquake in Turkey. My friend Gordon was one of our friends who first called me after the İzmir earthquake. With this understanding, we wanted to be the first country to reach Croatia after the earthquake that occurred here," he stated.

Many buildings were damaged and 160,000 people were affected by the 6.3-magnitude earthquake in Petrinja, which killed seven people and injured 27 people on Dec. 29, 2020.