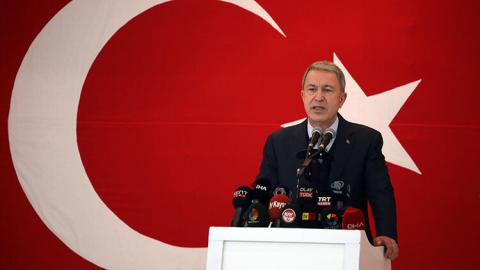 As the second largest army of NATO, the Turkish Armed Forces (TSK) is ready to combat ISIL, but the United States should cut its support to the YPG in Syria, the Turkish defense minister has said.

"The TSK, as one of the strongest armies of NATO, is here and ready to fight against DAESH. We'll fight against DAESH wherever they want. But this support to the terror organization should be ceased," Defense Minister Hulusi Akar told daily Hürriyet over the weekend.

Akar's words were a direct message to the U.S., which has been supporting the YPG both politically and militarily as its partner in the fight against ISIL in eastern Syria. Turkey recognizes the YPG as the offshoot of the PKK in Syria and, therefore, a terrorist organization.

"Turkey is making a very big struggle inside and outside. I tell those who lend support to the PKK/YPG: The reason why they support them is this group's so-called struggle against DAESH. There is no need for such pretext," he said.

Turkey is here to fight ISIL, Akar added, recalling that it was solely the TSK which engaged in a direct fight with ISIL in Syria. "Up to today, 3,700 DAESH terrorists were neutralized in Syria and Iraq. Around 100,000 DAESH members were prevented from entering Turkey as a result of communication with the U.S.," the minister stated.

Turkey and the U.S. have long been at odds over the latter's support to the YPG in eastern Syria. Turkey says the YPG is using the military and political support it receives from the U.S. to create an autonomous region from where it is posing a threat against Turkish citizens and borders.

"We demand intellectual ethic from our allies," he said, drawing the fact that the U.S. is supporting a terror...