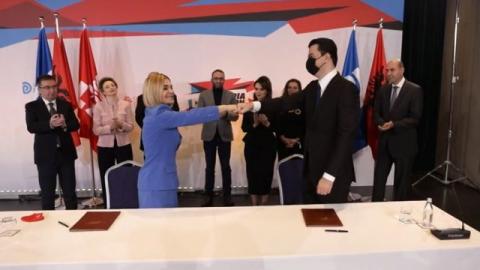 The main opposition Democratic Party, PD, and the smaller left-wing Socialist Movement for Integration, LSI, put their ideological divisions aside on Monday to sign a pre-election agreement ahead of a legislative vote on April 25, under the slogan, "Albania, a home that wins".

Under the agreement, the two parties will run separate candidates' lists in the elections but will then cooperate on forming a government should they topple Edi Rama's Socialist Party, who is seeking a third consecutive mandate as Prime Minister.

In tandem with the deal with the LSI, the Democratic Party has also formalized a pre-election coalition deal, called "Democratic Party - Alliance for Change", binding a myriad alliance of no less than smaller 13 political parties.

"As the United Opposition, the PD and LSI will compete in the elections with two lists (PD-AN + LSI), to achieve full and comprehensive political-electoral representation and the crowning the victory of the opposition in the elections," the agreement says.

In the 13-point agreement signed on Monday, the parties, among other things, pledged to pull the country out of economic crisis and achieve the fulfilment of all conditions needed for EU membership.

"We as the LSI and PD will continue to be two entities with their own identities and we will continue to, and at times we may, have objections to certain policies - but we pledge that we will find a common language of cooperation and work hard always to put the interests of Albania and the Albanians first," Monika Kryemadhi, head of the LSI, said.