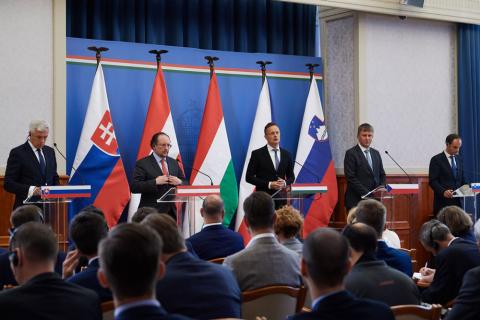 Brdo pri Kranju – Foreign Minister Anže Logar will host a meeting of Central 5 foreign ministers in Brdo pri Kranju on Monday. Logar and his counterparts from Austria, the Czech Republic, Hungary and Slovakia will talk about Slovenia’s EU Council presidency priorities and efforts to contain the coronavirus pandemic.

The meeting will be dedicated to the presentation of the priorities, focusing on the Western Balkans and efforts to strengthen resilience, and the exchange of information and plans regarding coronavirus measures, said the Foreign Ministry.

The ministers will discuss other European and international issues as well, including transatlantic relations, the EU’s relations with third countries and future relations between the bloc and the UK, according to the ministry’s press release.

There have been four C5 meetings so far – officials of the five countries met in Vienna in June 2020, in Budapest in July 2020, in Brdo pri Kranju in September 2020 and via videoconference in November 2020.