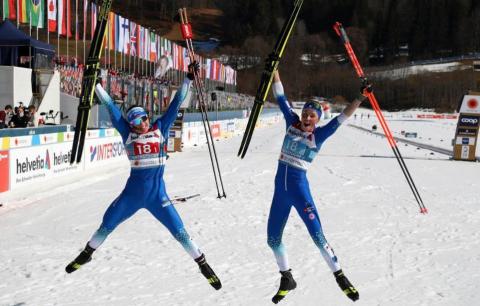 Lampič, who recently received the small crystal globe as the overall World Cup winner in the women’s sprint discipline, won the bronze medal in the women’s classical sprint in Oberstdorf on Thursday.

Slovenia’s 2020 female athlete of the year was silver in the world championships team event with Katja Višnar in Seefeld, Austria, in 2019.

Today’s bronze was secured in the penultimate and last rounds of the race when Lampič stepped up to outrun Russian Natalija Neprjajeva by a whisker after Urevc lost precious seconds.

“I did not fully believe in myself when Eva passed the baton lagging behind. But I carried on,” Lampič told public broadcaster RTV Slovenija after the race. Her quick pace and a bit of luck were enough for the bronze medal.

The 25-year-old said that any medal counted and bronze was more than enough today, lauding their team’s ski preparation and waxing.

Sundays’s third place is the biggest feat of Urevc’s career to date. The firm type of snow in the qualifying rounds was better suited to her, but she did her best in the final, Urevc, aged 25 as well, said.

The pair won silver in the women’s team sprint event at the Ulricehamn World Cup competition in Sweden in early February.

This bronze medal marks the fifth podium appearance for Slovenia at this year’s world championships in Germany.

Meanwhile, Slovenian cross-country skiers Janez Lampič and Vili Črv did not qualify for the final.