UN: At least 18 killed by Myanmar forces in several cities 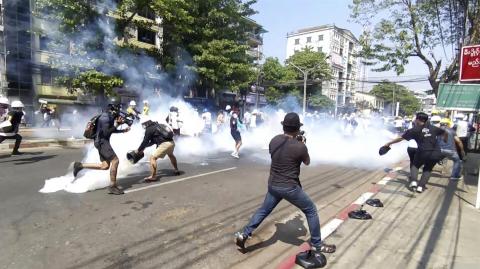 Security forces in Myanmar opened fire and made mass arrests on Feb. 28 as they sought to break up protests against the military's seizure of power, and a U.N. human rights official said it had "credible information" that at least 18 people were killed and 30 were wounded.

That would be the highest single-day death toll among protesters who are demanding that the elected government of Aung San Suu Kyi be restored to power after being ousted by a Feb. 1 coup. About 1,000 people are believed to have been detained on Feb. 28.

An Associated Press journalist was taken into police custody on Feb. 27 morning while providing news coverage of the protests. The journalist, Thein Zaw, remains in police custody.

The AP called for his immediate release.

"Independent journalists must be allowed to freely and safely report the news without fear of retribution. AP decries in the strongest terms the arbitrary detention of Thein Zaw," said Ian Phillips, AP vice president for international news. The Foreign Correspondents Club of Myanmar also condemned the arrest.

The Democratic Voice of Burma reported that as of 5 p.m. in Myanmar, there had been 19 confirmed deaths in nine cities, with another 10 deaths unconfirmed. The independent media company broadcasts on satellite and digital terrestrial television, as well as online.

DVB counted five deaths in Yangon and two in Mandalay, the largest and second-largest cities.