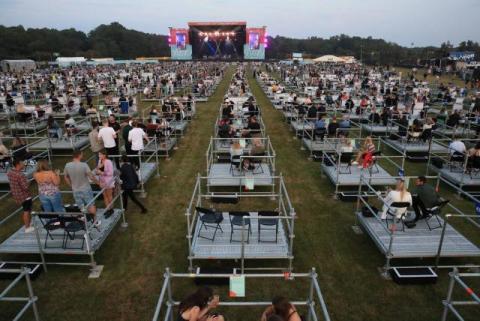 Ljubljana – Musicians and event organisers are pushing for the gradual relaunch of public events and the revival of the events sector after several countries already took steps in this direction. They believe now is the time to save the summer season and the sector, and that their proposals should be included in the next stimulus package.

The Coalition of the Music Sector, Trade Union of Slovenian Musicians, the Association of Concert Organisers, the Slovenian Music and Information Centre, and the charity MiDelamoDogodke, said Monday companies and other subjects from the events industry are completely exhausted by the restrictions.

“If we lose another summer, which brings in the most revenue to the events sector with festivals and other mass events, the damage suffered by most stakeholders will be too big for the sector to ever recover again,” said the five associations.

They propose that a realistic plan for a gradual relaunch of public events be made in cooperation with the National Institute for Public Health. They would like criteria for relaunching set along with potential dates that event organisers could rely on.

Given the current situation, they believe events could begin on 1 April and be held without restrictions as of 1 July in line with the vaccination plan.

They also propose a guarantee scheme following the example for Austria, Germany and the Netherlands, which plans to lift all restrictions for the events sector on 1 July. Recently, the UK also adopted a plan of gradual reopening of the sector and lifting of restrictions as of 21 June.

The news of the latter prompted many announcements of festivals hosting more than 100,000 people a day, the five organisations said.

Opposition, coalition MPs on opposite banks over PPE procurement