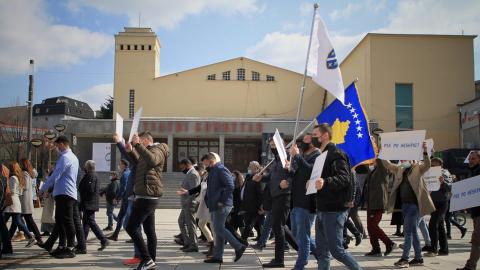 Around 50 supporters of Kosovo Bosniak political party Nasa Inicijativa protested in Pristina on Tuesday, claiming that the parliamentary elections on February 14 were "an undemocratic electoral process and compromised by manipulations".

Traditional political parties representing the Bosniak and Roma communities in Kosovo have complained that new and unknown parties emerged at the elections and suspiciously won more votes than them.

The new parties received more votes in Serb-majority municipalities than in municipalities where Bosniak and Roma mainly live, sparking allegations that this was a scheme engineered by the Belgrade-backed Kosovo Serb party, Srpska Lista, to increase its influence in parliament.

The state prosecution has pledged to investigate the claims. The new parties have denied collaborating with Srpska Lista.

Osman Dzudzevic, one of the organisers from Nasa Inicijativa, told BIRN that he expects the Constitutional Court to conclude that the non-Serb ethnic minority communities' rights to "effective and legitimate representation" have been violated.

"One possibility is to remove the written mandate of the representatives if it is found that there is no legitimacy for community representation. I think that the long-term solution is a change to the electoral law … to enable the effective representation of communities in the future," Dzudzevic said.

A total of 20 of the 120 seats in the Kosovo Assembly are reserved for non-Albanian communities; ten for Serbs and ten for other communities - Roma, Ashkali, Egyptians, Bosniaks, Turks and Gorani.

The seats set aside for representatives of Serbs were all won by Srpska Lista at the elections last month.