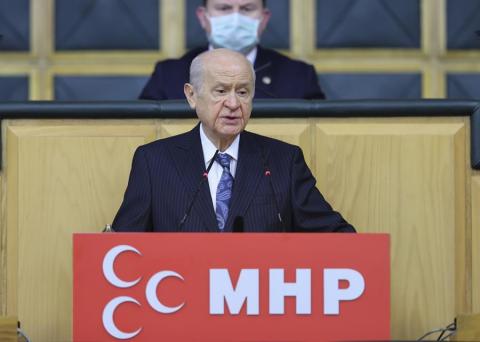 "If Turkey is a state of law, the closure of the HDP is emergency and crucial," he said, addressing the MHP's parliamentary group meeting.

"In addition, one should not allow them to operate again under another name, for example, even under the umbrella of a front terrorist formation called the Party of Democratic Regions," Bahçeli stated.

It is a very "important and expected" development that the Supreme Court of Appeals initiates an investigation into the HDP, Bahçeli said, noting that the closure of political parties will be finalized by the Constitutional Court in a lawsuit to be filed by the Court of Cassation.

"Is the CHP in for removing the immunity of the HDP lawmakers? What will be the positions of the CHP and İYİ Party," he asked and blamed the ones supporting the HDP for "giving support" to the illegal PKK group.

He, meanwhile, undermined possible reactions from the international actors on the issue of the HDP. "It doesn't matter what the U.S. and the EU say," Bahçeli said.