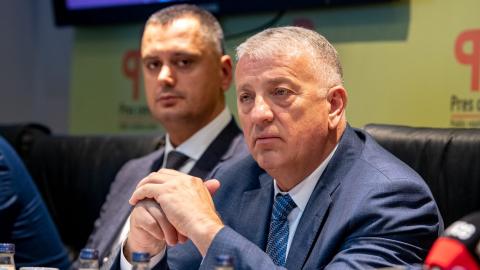 One of the blocs in the ruling coalition, URA, said that the sackings of police officers who were close to the former administration was fulfilling the new government's promises.

"We are continuing changes in the security sector. It's time for untainted professionals to lead the police," URA said in a statement.

In parliamentary elections in August last year, three opposition blocs won a slender majority of 41 of the 81 seats in parliament, ousting the Democratic Party of Socialists, DPS, which had ruled Montenegro since the early 1990s.

In December, after being urged to resign by the new governing coalition, Lazovic denied accusations that he has ties with organised crime groups, insisting that he has acted professionally throughout his career.

"I did my job professionally and there are no stains on my career. I will not resign because my team have good results recognised by our international partners," he said.

Lazovic's dismissal came after the new government on February 22 appointed Zoran Brdjanin as the head of the Police Directorate. Brdjanin then dismissed Lazovic and appointed Dejan Knezevic as the new head of the police department for fighting against organised crime and corruption.

Marko Vesovic, a journalist from daily newspaper Dan, said the new government has to make deep changes in the police in order to improve the fight against organised crime and corruption.

"It was time for new faces in the police. As a citizen, I hope that the state prosecutor will investigate Lazovic's alleged ties with organised crime groups," said Vesovic.