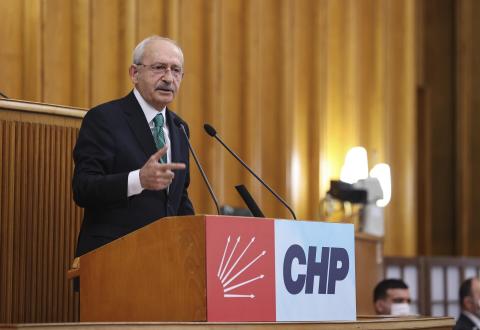 Kemal Kılıçdaroğlu, the leader of the main opposition Republican People's Party (CHP), has underlined that parliamentary immunity is a must in safeguarding parliamentarians in the absence of judicial independence, while commenting about an ongoing discussion following the submission of summary of proceedings against 33 MPs including many from the Peoples' Democratic Party (HDP).

"The immunity of a parliamentarian cannot be between the two lips of one person. That would be totally against the national will," Kılıçdaroğlu said at his party's weekly parliamentary group meeting on March 2.

Parliamentary immunity is a must for all politicians to perform their duties in line with the authority they were granted from the people, Kılıçdaroğlu said, stressing that this principle has become much more important because of the degradation of judicial independence in Turkey.

"Parliamentarians have no guarantees other than parliamentary immunity," he said, criticizing President Recep Tayyip Erdoğan for instructing the ruling party lawmakers to vote in favor of the removal of the immunities of the dissident member of parliaments.

Kılıçdaroğlu accused Erdoğan of intervening in the judicial processes about the opposition lawmakers, saying, "How can we discuss the removal of immunities in a country where judicial independence has vanished?"

The CHP is in favor of democracy and will stand with those whose rights are violated, Kılıçdaroğlu said.

"If you use this issue of the removal of immunities as a tool of political engineering against the opposition alliance, this is wrong and unethical."