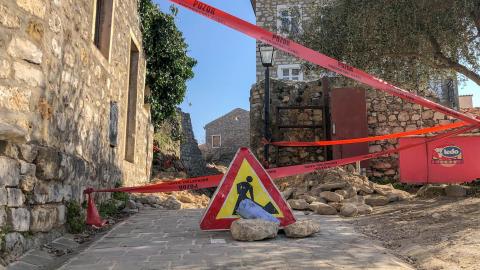 The Montenegrin government and local authorities in Ulcinj have promised to restore the walls, but Lulgjuraj said the problems run deeper. And it's not only Ulcinj that is in danger.

At the other end of the Montenegrin coast from Ulcinj, Kotor's Old Town and the surrounding area have enjoyed UNESCO World Heritage status since 1979, but the United Nations' cultural agency has been warning for years that it risks being taken away due to excessive construction - mainly apartments - and uncontrolled tourism.

Construction in the Old Town was banned in 2017, but conservationist Aleksandra Kapetanovic of NGO Expeditio, says the port - once an important artistic and commercial center famed for its schools of masonry and iconography - remains endangered.

"Institutions, both at the state and local levels, are formally in favor of preserving World Heritage status, but together they continue to encourage construction and the implementation of catastrophic plans that directly threaten the landscape," Kapetanovic told BIRN.

"With the development of various new hotels, we have lost valuable segments of cultural heritage forever and gained cheap decoration of the kind that can be found anywhere."

There is also unease over the development of a high-end resort on the uninhabited islet of Mamula at the entrance to the Bay of Kotor, the...