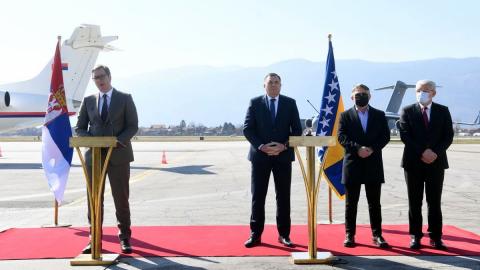 Serbian President Aleksandar Vucic arrived by plane in Sarajevo on Tuesday with 10,000 AstraZeneca vaccine doses for Bosnia and Herzegovina, which has been struggling to procure any COVID-19 vaccines.

The vaccines, enough to inoculate 5,000 people, are intended for the country's Bosniak- and Croat-dominated Federation entity, which has yet to receive any vaccines. Bosnia's Serb-dominated Republika Srpska entity has so far procured 22,000 doses of the Sputnik V vaccine from Russia.

"I am happy if we will save five, nine or ten lives," Vucic told reporters at Sarajevo airport.

Vucic also took a swipe at the European Union, as vaccines ordered by Belgrade via the EU under the COVAX scheme have not arrived in Serbia yet. Serbia launched its vaccination scheme by procuring significant amounts of Chinese and Russian vaccines instead.

Vucic said he would say thank you when the COVAX vaccines arrive, but that he does not care when that will be: "I can only say I don't care, we worked without it [COVAX]," he said.

"We hoped for vaccines from the EU, we didn't get any," he added.

Bosnia initially relied almost entirely on the COVAX mechanism, but when it became clear that vaccines from the programme would be delayed, the Sarajevo authorities decided to try to negotiate directly with the manufacturers.

"In a situation when global multilateral mechanisms related to the procurement of vaccines have failed, President Vucic sent an offer, we accepted it and I thank him once again," Sefik Dzaferovic, the Bosniak member of the tripartite Bosnian presidency said after meeting Vucic.

Serbia has also allowed health workers from Republika Srpska to be vaccinated in Serbia.

Zeljko Komsic, the Croat member of the Bosnian...