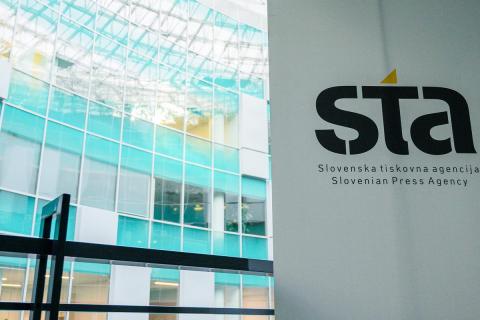 Ljubljana – Two months after the expiration of public and commercial news service contracts between the STA and the government, which had previously been renewed annually, the STA restricted access to its news items for the government administration on Monday. Parliament Speaker Igor Zorčič believes the time has come for the matter to be resolved in court.

The state is obligated to provide sufficient funding for the STA, therefore the government and the Government Communications Office (UKOM) on its behalf must do everything in their power for this to become reality, Zorčič, a member of the coalition partner Modern Centre Party (SMC) said today.

He noted that MPs from the ranks of the SMC had spearheaded amendments to the seventh economic stimulus package that addressed funding for the press agency for the final quarter of 2020 and for 2021.

“I believe that all conditions have been met, even though this is a sad moment, for the STA to try to find justice in court. The legislative basis exists, but if the government and the STA are unable to resolve this on their own and in a peaceful way, the STA probably has no other option,” Zorčič said.

When asked whether the SMC could still influence the course of events in some way, Zorčič said that the more politics interfered with the STA, the worse. Likely, the time has come for courts to resolve the situation if the politics is incapable of doing so.

The opposition, on the other hand, once again called for sustainable funding for the press agency. Under the STA act, the state is obligated to fund the public service the STA provides. Payments are then implemented via annual contracts based on annual business plans approved by the agency’s supervisory board, which is appointed by the National Assembly.

Every year since Slovenia gained independence and the STA was established by the government, the government and the agency have also signed contracts allowing the government administration access to the agency’s news items in full, not just the segments open to the public.

In autumn, UKOM suspended funding demanding information which the STA management says UKOM has no right to access. It added, however, that it would be fully willing to provide the information to the government, if the government requested, but this has not happened.

In December, the SMC pushed through an amendment to an economic stimulus package under which the government had to pay all outstanding obligations to the STA and provide funding for the public service in 2021 based on the STA’s business plan even if the sides fail to sign a funding agreement.

After that, UKOM paid all the bills issued for the commercial contract until the end of the year, but no contracts have been signed for 2021, neither for the public service as required under the law, nor for the commercial access to the STA newswire for for government bodies.

Opposition Marjan Šarec List (LMŠ) deputy group leader Brane Golubović said today this indicates that the government is able to knowingly break the law without consequence because there is nobody to oppose it. The government is not doing this only with the STA, which he finds concerning.

“We’re actually a bit shocked that somebody can so blatantly violate the law. We can demand an extraordinary plenary, an emergency committee session, we can propose a law. But if a part of the coalition sees no problem in the government violating the law, then we can only be worried about the country we’re living in,” Golubović said.

Matej T. Vatovec, an MP for the opposition Left, believes that Prime Minister Janez Janša is continuing his assault on independent media. The fact that UKOM did not renew the contract with the STA only goes to show that the government wishes to subdue every independent institution and clearly wants to literally destroy the STA, he said.

This should set off alarms, as the STA is an institution of national importance, therefore pressure from the government is unacceptable, said Vatovec, adding that the Left and the opposition were looking for legislative solutions.

Jurij Lep of the Pensioners’ Party (DeSUS) expressed dissatisfaction, adding that the STA was one of the few more or less unbiased media outlets in the country. The legislative branch obviously does not have enough power to pressure the government and UKOM, he said.

A number of media associations and organisations have urged funding for the STA in the past months. Most recently, Reporters without Borders said that suspension of funding was an attempt to undermine the agency.