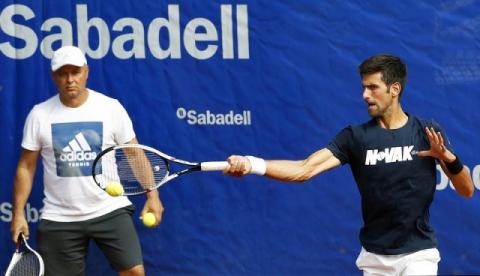 Vajda stayed in Slovakia this year, in order to be with his family, he became a grandfather for the second time, and Novak made him happy with a new triumph in Australia.
In an interview for the Slovak portal "Sport", an experienced expert revealed how it all worked from his point of view.
"We heard each other every day. We are all in front of the laptop, when that video conference starts, there is also a fitness trainer. We analyzed the previous matches, made tactics for the next opponents, solved his health problem. After the match with Fritz, a lot had to be arranged. Hats off to Nole, he did everything he could", Vajda said.
Vajda admitted that he felt a bit unusual when the finals ended, and he was not physically present with Novak and other team members to share the joy.
"I was immediately sorry I wasn't there. I will never forget the moments after winning that first Grand Slam title in 2008 at the Australian Open and what happened in the locker room. Of course I wish I had been there this time, but the world is going through hard times. I owe a lot to Goran, who has been preparing for that first title with Novak for a long time when they were alone. He was there under a lot of stress, he was so happy and it is normal that they hugged after the victory. He is a big part of our team and creates a great atmosphere", added the Slovak expert.

It is true that Vajda worked with Novak before leaving for Australia.
"We were together in Marbella, during December. Two weeks of intensive training, fitness work. We worked on service, first and second. Also on the backhand, which is especially important in all matches. Fritz, Zverev, Raonic and Medvedev are tough opponents. We tried...

Sharp increase in destruction of virgin forest in 2020