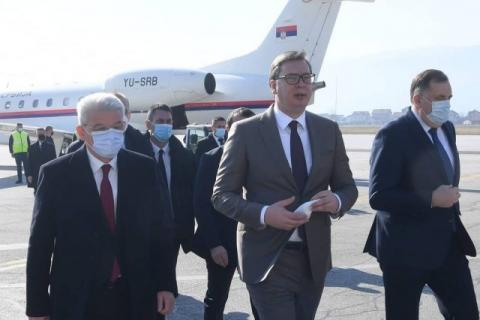 At Sarajevo's Butmir Airport, the President of Serbia was welcomed by the Chairman of the Presidency of BiH, Milorad Dodik, and the Bosniak member of the Presidency, Sefik Dzaferovic.
It was announced that Vui would be greeted at the airport by the complete Presidency of Bosnia-Herzegovona, but the Croatian member eljko Komi was absent.
Prior to his departure, Vui told the Sarajevo media that he was very happy to be able to come to Sarajevo and bring the first doses of vaccines. That, he says, is not help, but "something that belongs equally to all of us", and Serbia, as he adds, "had the good fortune to provide more vaccines".
"That's a total of 10.000 doses. Tomorrow 5.000 doses, and in a few days another 5.000 doses. I think that's especially important for health workers working in the red COVID zones in Bosnia-Herzegovina. My message is that we have to turn to each other, without regarding everyone else as more important", President of Serbia emphasized.
"I came to say that these are vaccines for the Federation, whatever you want, we will deliver to you. We ordered Moderna and we will have five vaccines to choose from. We should not quarrel in front of the European media, we live next to each other and have no one closer. Today, when we expected the assistance of much more powerful people, we realized that we have to rely on each other. We in Serbia cannot be happy if the people in Sarajevo, Banja Luka, Bjeljina or any other place in Bosnia-Herzegovina are not happy," he said.
Vui reminded that he had spoken before about the Balkan nations that have great strength, great power when they are united. Minister of Health Zlatibor Loncar is in Sarajevo with the President of Serbia. Bosnia and Herzegovina is the third country in the...

The start of the school year might be postponed?