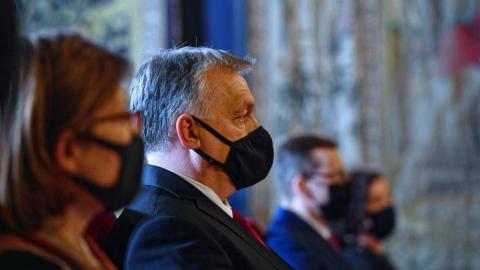 "The governing body of Fidesz has decided to leave the EPP Group immediately," Prime Minister Viktor Orban wrote in a letter to Manfred Weber, chairman of the EPP Group in the European Parliament. "The amendments to the rules of the EPP Group are clearly a hostile move against Fidesz and our voters."

Those amendments concerned new rules of procedure that could lead to the suspension or exclusion not only of individual members, but entire national delegations. Under the new rules, if a party is suspended by the EPP, the parliamentary group could decide with a simple majority about suspending those members, stripping them from holding elected positions or speaking on behalf of the group in the European Parliament.

Not wishing to look like a pariah in its own party family, Orban apparently made up his mind over the weekend after it had become clear that his attempts to cajole the other EPP members and his numerous threats to leave, the last one in a letter on Sunday, had finally failed.

Dismissing the pressure from Fidesz, which has traditionally relied on the patience of Angela Merkel's Christian Democrats (CDU/CSU), six EPP member parties - from the north and the Baltics - urged Weber to put Fidesz's fate up to a vote as soon as Thursday and suspend its MEPs, payback after years of provocation by Orban and his allies.

Hungary's independent news site Telex wrote that ill-feeling towards Fidesz had been further strengthened by rumours...