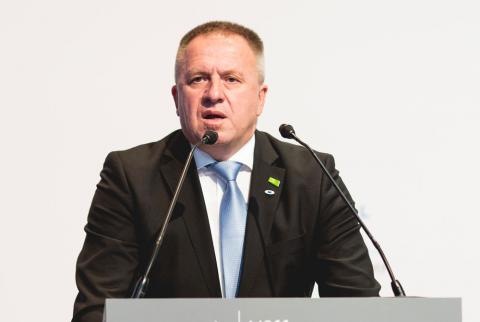 Ljubljana/Brussels – Economy Minister Zdravko Počivalšek took part in a virtual session of EU ministers in charge of trade on Tuesday to discuss the new medium-term trade strategy that is to set the political course of the EU’s trade and investment policies in the coming years.

“We must build a resilient and sustainable EU economy and create opportunities for companies, especially small and medium-sized companies. We support a more decisive plan for fighting climate change and for sustainable development,” Počivalšek was quoted as saying by the Economy Ministry.

Slovenia believes the trade policy should develop together with the industrial policy and that efforts should be made for more resilience. This could be achieved with greater economic diversification, where free trade agreements have a key role, he said, adding though that EU rules and principles, including in labour and environment, must be respected.

As for additional political tools to protect the EU from unfair trade practices, the ministry said it was crucial that their implementation and execution be carefully managed.

The European Commission presented the EU’s trade strategy on 18 February, saying it was needed because of the challenges faced by the bloc, including the post-pandemic recovery, climate change and unilateralism. The Commission has also been pushing for a reform of the World Trade Organisation.