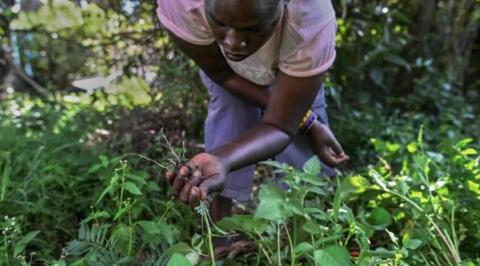 At first glance, the round black pellets could easily be mistaken for animal dung. But these hardy little balls contain acacia seeds that are helping regrow Kenya's depleted forests.

In a tranche of razed forest bordering the Masai Mara wildlife reserve, a team of rangers scatter generous handfuls of "seedballs" around the bald clearing to give nature a fighting chance to regenerate.

It takes just minutes for the eight rangers from the Mara Elephant Project, a conservation group, to toss some 22,000 seedballs across this ravaged corner of the Nyakweri forest.

"It is very simple," said Jackson Maitai, whose rangers discovered that loggers had illegally cleared this land during their routine patrols to protect elephants in the area.

"The seedballs are not actually heavy. We just throw them away everywhere we see there is deforestation, so it is not a big deal."

Humble though they may be, seedballs are tackling a century-old problem in Kenya.

Trees were felled en masse by colonial administrators to fuel a train across East Africa, while land today is cleared for agriculture and charcoal production as Kenya's population grows upward and outward.

The forests bordering the Masai Mara, the legendary wildlife haven and savannah wilderness in the country's southwest, are no exception, chipped away for pasture, crops and charcoal, a cheap fuel.

Nyakweri, for example, has lost more than 50 percent of its forest cover in the past two decades, reducing key habitats for wild animals, according to Marc Goss, the director of the Mara Elephant Project.

But forests, which cover just seven percent of Kenya's land mass, also act as water reserves and a powerful bulwark against climate change and desertification.