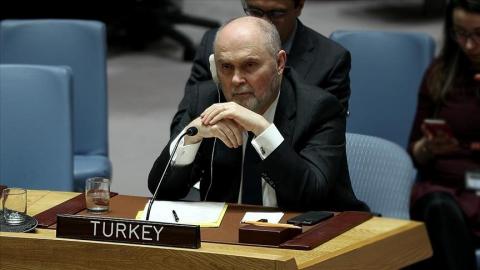 The international community cannot leave the Syria tragedy on Turkey's shoulders, the Turkish U.N. envoy said on March 3, as the Syrian war nears its 10th anniversary.

Feridun Sinirlioğlu spoke at a U.N. General Assembly panel on the human rights situation in Syria and reiterated that Turkey hosts 4 million Syrians who have fled a violent crackdown by the Bashar al-Assad regime in March 2011.

"The international community cannot turn its back on this tragedy and leave it only on our shoulders," said Sinirlioğlu. "Three million people in the northwest rely entirely on lifeline U.N. cross-border operations conducted from Turkey."

The Turkish envoy also called for the opening of additional crossing points to enable the U.N. to reach those in need through direct routes.

"This is not a political matter. It is a humanitarian urgency. So, be courageous and extend your helping hand to the Syrian people," he added.

At his opening remarks of the panel, UNGA President Volkan Bozkır said 10 years on, the Syrian conflict and its effects are far from over.

"We may have become familiar with the images of death and destruction, but we must not become immune," said Bozkır. "This is not a natural disaster. There is a human hand behind this catastrophe."

Syria has been ravaged by a civil war since early 2011 when the Assad regime cracked down on pro-democracy protesters.

Hundreds of thousands of people have been killed and more than 10 million displaced, according to U.N. estimates.